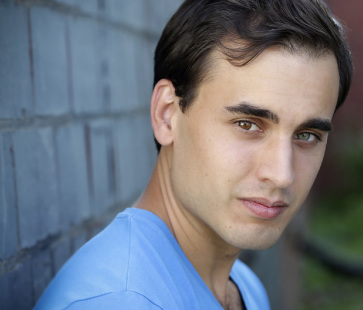 is from Lexington, Ky. Douglas graduated from Belmont University in 2012 as an honors student with a BM in musical theatre performance. He is also a professional fiddle player and recently appeared in Roundabout Theatre Company’s THE ROBBER BRIDEGROOM as an onstage musician and clogger. His other recent credits include the world premiere of Charles Mee‘s SOOT AND SPIT at The New Ohio, DESPERATE MEASURES at The York Theatre, A CHRISTMAS CAROL at Actor’s Theatre of Louisville, FIDDLER ON THE ROOF at Studio Tenn, LOST HIGHWAY and COTTON PATCH GOSPEL at Flat Rock Playhouse. Douglas’ writing for the stage was recently seen at Penn State as part of their Nu Musical Theatre Summer Festival with a staged reading of DEEP WATER BALLAD, (Book by Douglas W. Tieman, Music/Lyrics by Chris Rayis). Douglas is also a collaborative member of The Lobbyists, a NYC based band and theatre group who recently performed their concert-play SEAWIFE at The White Heron Theatre of Nantucket. Douglas owes whatever success he has had to the love and support of his wife Annabelle and his family. www.douglaswaterburytieman.com