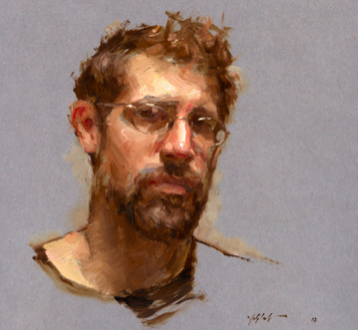 In the realm of Classical Realism, Travis Schlaht’s subdued but powerful paintings are commanding ever-increasing esteem. After receiving a baccalaureate degree in Studio Art at The University of the Pacific (Stockton, CA) in 1997, Schlaht moved to New York to acquire a more stringent art academic education at the Water Street Atelier with Jacob Collins. During this time, the artist began to analyze his subject matter in determined contemplation, becoming adept in the genres of still life, portraiture and landscape.

Deftly rendered yet delicate and painterly, Schlaht’s works have an unspoken purity to them. He is well known for his still life paintings, composed of exacting detail, sensitive handling and dramatic use of color. Those drenched in a monochromatic and/or white palette are especially beguiling and seem reminiscent of James Abbott McNeill Whistler’s Symphony in White Series as well as the more extreme monochrome works of modernists Kazimir Malevich and, later, Robert Ryman.

His portraits are painstakingly accurate in likeness; however, they never seem to loose the evocativeness of each brushstroke. Each painting has a playful and light heartedness in its execution yet there is a seriousness and monumental quality to each finished work. Schlaht tends to the landscape with just as much care and intensity, creating precise and verdant canvases. Whatever the genre, it is quite clear that he understands and transforms the world around him in a manner that is thought-provoking and sincere.

Travis Schlaht is represented by galleries in New York, San Francisco, Cape Cod, and Charlotte, NC, and his work has been shown throughout the United States and England. He is also an instructor at the Grand Central Academy of Art and co-founder of the Hudson River Fellowship.